The wrestling, of course, was phenomenal, with an emphasis on bearhugs, my favorite wrestling hold. It was a real turn-on watching Mark wrap his massive arms around Scrappy and squeeze him again and again, Scrappy's biceps bulging as he struggled to escape.

If you're a fan of big vs. small matches, you will NOT be disappointed!! 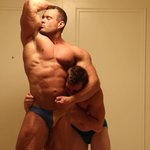 The behemoth starts his assault by nearly crippling the boy in his arms as he squeezes him over and over in one bearhug after another to the point that Scrappy can do nothing but go limp again and again. Then he further humiliates him by wrapping his huge thighs around Scrappy's head, arm, and waist. I was worried during the second head-scissor that Scrappy's head might just pop off! Add in a few moves that target Scrappy's poor back and you've got a beaten and battered hottie lying on the ground gasping for breath.

To finish things off (or to start things off depending how you look at it) the two guys pose next to each other for several minutes. It's incredible to see how big Mark Muscle is compared to Scrappy. To be honest, if I was Scrappy the size difference alone would cause me to run for the hills, but he's a trooper and actually keeps up with the man who just humiliated him during their match.