This review/description was made by Joe from Ringside at Skull Island Blog, we thank him for his efforts. 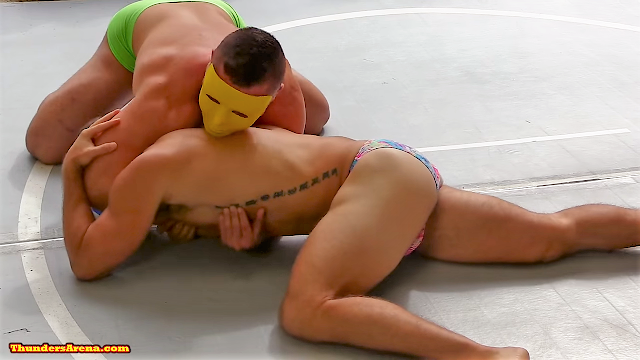 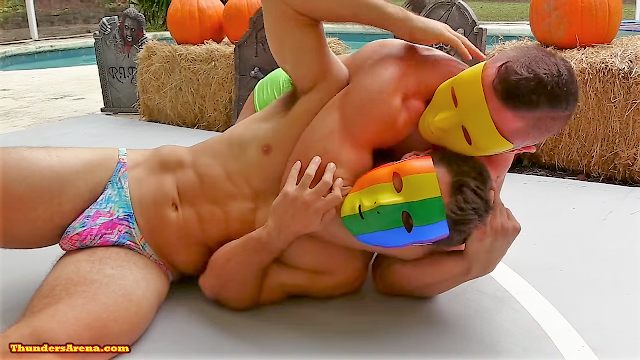 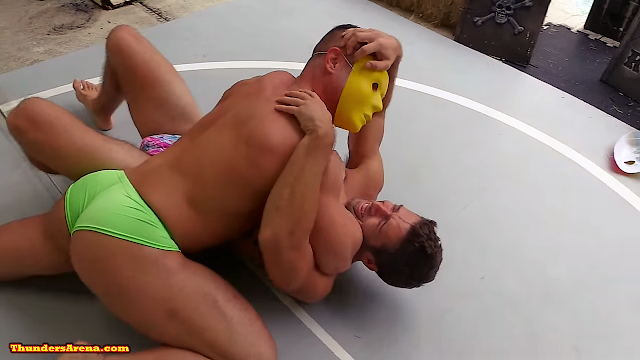 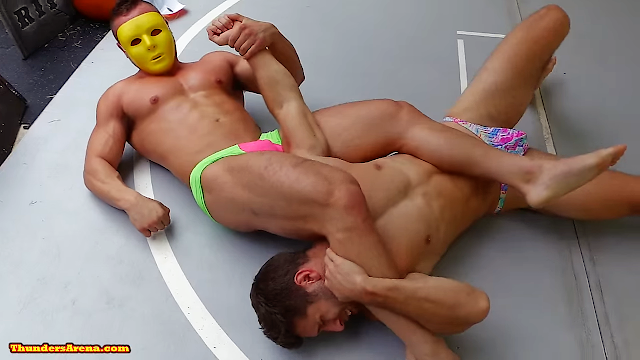 Blayne vs the Mystery Man, Halloween Havoc 2018 (Thunder's Arena)
Masks hide faces, of course, but they often bring bodies into sharper focus. The Mystery Man in the first tale is smooth and sumptuous,  the kind of masked man just about anyone would welcome as a Halloween treat. In a rainbow mask, Blayne worships the Mystery Man's physique, gently caressing the unyielding bumps and curves. He is kneeling and embracing the man's leg, resting the side of his head up against it when suddenly the muscle-hunk shoves him away. "Get off me," the man orders, but then immediately admits to liking the physical attention. Sensing the man's ambivalence, Blayne draws near again, at which point the Mystery Man grabs him by the neck and forces his face to the wrestling mat.
"I just want to touch you," Blayne pleads. But the Mystery Man craves rougher body contact. He grips Blayne in a rear naked choke and puts him to sleep. As Blayne lies unconscious at his feet, the Mystery Man strikes poses for the camera. He then nudges Blayne back to consciousness. Blayne's initial impulse is to further satisfy his craving for the touch of the man's taut and silky flesh. Mystery Man declares that his worshiper has not yet learned his lesson and again puts him to sleep, this time removing Blayne's mask. His curiosity satisfied, he poses some more and then rouses Blayne to consciousness with a slap on the butt.
Blayne is shocked to see he has been unmasked. He accuses the Mystery Man of reneging on their deal - to maintain their anonymity throughout  the tryst. Now he attempts to unmask Mystery Man, but he's quickly and easily subdued  ... and just as quickly released, mainly because Mystery Man wants to fight. The match consumes most of the remainder of the video, and Blayne puts up a bigger offense than his incognito buddy expected. Does Blayne discover the stranger's true identity?  Does the revelation lead to an even sweatier battle and ultimately asphyxiation by a bare foot to the throat?"
Powered by
5.0 star rating 1 Review
0 Questions \ 0 Answers
ask a question
write a review
(1) (0) (0) (0) (0)
Show all reviews
ask a question
write a review
Thank you for posting a review!
We value your input. Share your review so everyone else can enjoy it too.
share
share
share
Thank you for posting a review!
Your review was sent successfully and is now waiting for our staff to publish it.
Thank you for posting a question!
Please click on the link in the confirmation email we just sent you to submit your question.
Your question will appear on the site once someone answers it.
write a review
ask a question
Sort: Select
Updating Results
Verified Reviewer
0 star rating
02/24/20
Review by Anonymous User
On
share ' Share Review by Anonymous User facebook facebook Share Review by Anonymous User twitter twitter Share Review by Anonymous User LinkedIn linkedin Share Review by Anonymous User
02/24/20
Was this review helpful? 0 0
O
Oz
Verified Reviewer
5 star rating
12/05/19
Boyoing!
Review by Oz on 5 Dec 2019 review stating Boyoing!
This match starts off as many of Blayne's matches do with him muscle worshipping his opponent. Apparently they have a gentleman's agreement that they keep each other's identities secret as to provide mutual anonymity to both the admirer and to the admired. But anyone could tell right off the bat that it's Blayne under the conspicuously rainbow-colored mask (is this a hint, Blayne?), but I wasn't sure who the other wrestler was until the end of the match. I won't spoil it, but will say that i'm a big fan of his work in this match. He has ample muscle without being too muscly (is that a thing?) which to me strikes me as a more natural look. He's the kind of guy that you see at a bar that you're just hoping is low key into wrestling. Oh yeah and he has smooth, gorgeous legs that make me think he might have them waxed which is strangely erotic to me. Anyway, he unmasks Blayne pretty early on supposedly for being too handsy in his worship of the muscly beast in training and the rest of the match plays keep away not allowing Blayne to return the favor. Along the way he probably puts Blayne to sleep half a dozen times which is still my number one turn on in any match. He ends the match (having finally been unmasked) with one of the hottest of all sleepers in my opinion, the foot to throat sleeper. Boyoing! Does anyone else find that particular sleeper to be one of the hottest around or is just me? Pretty sure Blayne enjoyed it. ;-) Finally, there's also some sexy bantering between the two competitors throughout that truly made me wonder if there was more to them wearing the masks than for purposes of fitting the Halloween theme. Guess we'll never know! Terrific overall match. We'll miss you, Blayne!
On Blayne vs Mystery Man in Halloween Havoc 2018
share ' Share Review by Oz on 5 Dec 2019 facebook facebook Share Review by Oz on 5 Dec 2019 twitter twitter Share Review by Oz on 5 Dec 2019 LinkedIn linkedin Share Review by Oz on 5 Dec 2019
12/05/19
Was this review helpful? 0 0